A “Moveable Feast” of Wild Ideas

In November 2019, we convened our first inaugural Adventure Learning Summit, a peer-learning retreat that brought together representatives of a handful of our local partner organizations. Among them was Ashley Carruth, co-director of San Juan Mountain SOLES and one of our first Ambassadors! Read on for Ashley’s reflections on the weekend.

I jerked my foot back, nearly avoiding my big toe serving as a bridge for a wayfaring scorpion, drawn to the campfire’s glow or perhaps to the excited buzz emanating from the 11 women huddled around the fire ring. It was our second night on the trail and we were deep in a canyon somewhere in the Superstition Mountains. After two days of backpacking along a gauntlet of countless prickly foes, the scorpion didn’t faze us much. Besides, who can be bothered by a scorpion when you’ve got bigger arachnid to fry, like how to empower female-identifying young people to become tomorrow’s world leaders or how to advance equity and inclusion in the outdoors? We fed dried ocotillo arms to the waning fire, and excitedly discussed the questions that keep most of us awake at night. As I listened to the collective wisdom of the ten other women around me, I couldn’t help but feel a sense of gratitude coupled with the kindling of an inspiration that I knew would fuel me for months to come. I watched the fire’s light flicker across the faces of this new alliance and thought, this is just the beginning. 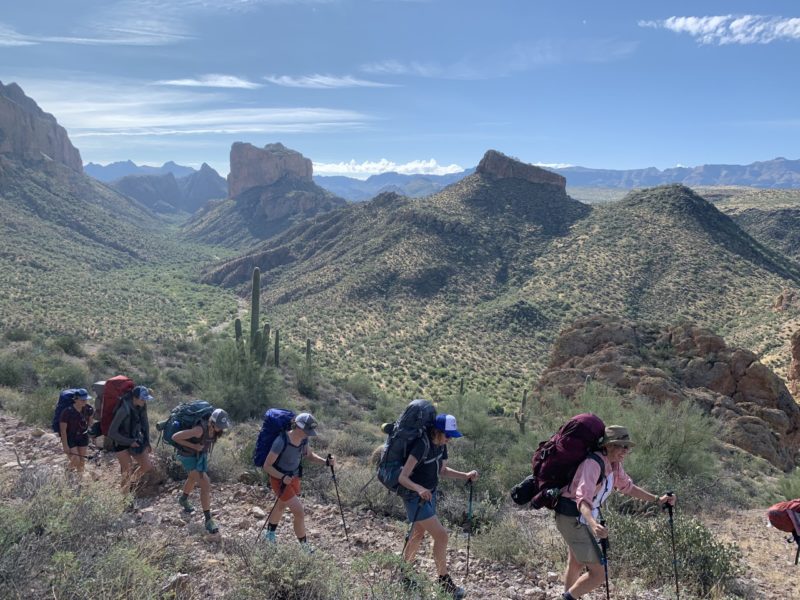 It was early November and a welcome reprieve from the shorter days and colder nights this time of year brings to the small corner of Southwestern Colorado from which I had traveled to meet this illustrious entourage. I didn’t know quite what to expect when, back in June, San Juan Mountain SOLES, an outdoor education and leadership development organization for high school girls that I co-direct, received the invitation for this first-ever Adventure Learning Summit. Advertised as part adventure, part peer exchange, part personal retreat, Cairn Project co-founders, Alison and Sarah, sought to bring together staff members from their partner organizations to “dig in – for ourselves, for our community, and for our work to widen access to outdoor learning opportunities for young women”. In attendance were founders and directors from five other non-profit organizations focused on empowering young girls and women, including Women’s Wilderness, GirlVentures, Embark, makeSPACE, and Wild Whatcom. Special guests included Gale Straub, host and producer behind She Explores, a podcast about women who are inspired by the outdoors; Sally Jewell, former Secretary of the Interior under President Obama and former CEO of REI; and Martha Wyckoff, emeritus Chair of the Board of the Trust for Public Land.

I flew in from Durango, just hours after having shown video footage of Sally touring Bears Ears National Monument to my 12th grade Humanities students, my way of saying “I’m sorry for leaving you with a sub for two days, but look who I get to hang out with!”. After a quick Lyft ride from the airport, I found myself in a conference room at the back of an REI store outside of Phoenix, a bit star-struck as I saw none other than Sally Jewell casually sitting, like a normal person, captively listening to our intrepid guides brief the room on how to pee and poop in the woods.

Like a pro, I played it cool, took the empty seat next to Sally and turned my attention to our guides as they projected images of the terrain and briefed us on the route. We would be backpacking approximately 18 miles through the Superstition Mountains, passing by Weavers Needle, a tall eroded volcanic remnant that plays a significant role in the legend of the Lost Dutchman’s Gold Mine. According to our guides, “der’s gold in dem hills” is not an arcane saying, but rather a mantra that haunts the occasional gold-rush fevered wayfarer drawn to these rugged mountains in search of the Lost Dutchman’s stash. Sadly, most seekers fall victim to the heat and aridity of this unforgiving terrain. 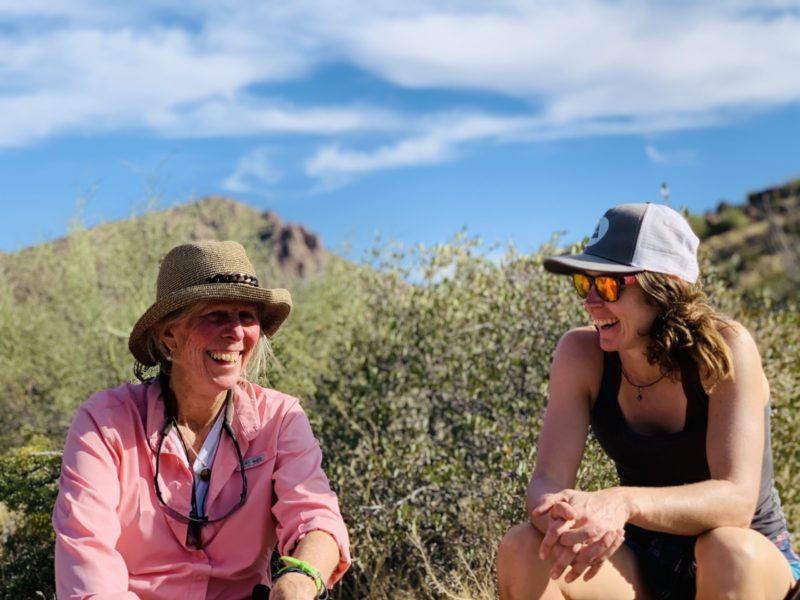 Situated in the Sonoran desert, the Superstitions are a mountain range like none other any of us had experienced and we would point and gawk with a healthy mixture of awe and fear at the tarantulas, tarantula hawks and rattlesnakes we found along the trail. Everything seems to bite in this landscape: the rocks razor sharp, the cacti ubiquitous and the sun’s heat relentless. Within the first hour on the trail, Sarah brushed up against a prickly pear cactus, releasing a spurt of bright red blood from her shin where the spine had implanted itself. Sarah laughed, nonchalantly extracted the quill, and kept on trekking. By this point, it should be clear that this was one unique retreat.

The genius of the trip’s format was that it allowed each of us to connect on our own terms and in the casual way that only wandering through the desert can cultivate. Most retreats take place indoors, typically in conference rooms around round tables for the more collaboratively-minded, or for the more authoritarian, in rows of desks facing toward a facilitator. You arrive, grab a name tag that you awkwardly place on your chest, not too high and not too low and not too close to your breast if you’re a woman, knowing that within the hour the name tag will curl up at the corners and fall off by lunch anyway. You grab some weak coffee and if you’re both brave and famished, a stale bagel, and take your place at your designated seat alongside people whose names you will forget as soon as their name tags fall off at lunch anyway.

But Sarah and Alison are much too creative for conference rooms and stale bagels, as they, like all the women on this trip, know well the power of wilderness to spark wild ideas and form authentic community. And so each day on the trail was like a “moveable feast” (as Martha would call it) of conversation. We would hike for about an hour at a time between water or lunch breaks, an hour that would fly by as we were all in deep conversation with the woman immediately ahead of or behind us. We’d circle up at breaks, the one-on-one conversations easily merging into a collective banter, barely noticing we had stopped.

Each night, as the sun’s setting gave rise to a star-struck sky, we would build a fire from a mixture of cheatgrass and dried mesquite bush branches. Gathering firewood in the Sonoran desert is an exercise in resourcefulness and patience. We would scour the washes and army crawl through claw-like underbrush to sniff out meager supplies of dead wood– bigger than an inch in diameter and we’d whoop with delight! Tending the fire was no less fastidious, as the desert’s supply of kindling burns hot and fast and if you aren’t paying attention, your companions will soon be shivering, casting forlorn glances at the glowing coals and willing them to erupt into flames again.

However, this crew of industrious women don’t readily let flames die, especially when there is inspired conversation on the line. And so we’d circle up around the fire, bellies full on coconut quinoa curry and drop into a conversation that felt like a descendent of our predecessors, the female trailblazers who whether through sport or industry, politics or education, set the foundation that allows us to do the work we do now to connect youth to themselves, each other, and the outdoors. And we were lucky enough to have two such trailblazers among us in Sally and Martha.

We took turns sharing our triumphs and challenges, questions and fears. The conversation drifted from how to grow our programs in sustainable ways, to ways to include equity in our operations from top to bottom, to how similarly-focused organizations can work together to serve overlapping demographics. Someone shared the fact that there are 25 million K-12th grade girls in the United States and that if you combine the efforts of all national girl-serving organizations, we are only reaching about three million, or about 12% of girls. That means 22 million girls in the US aren’t being reached. How do we expand our impact?

Those fireside chats reminded me of the power of partnership. Listening to the wise words of this diverse group of women, from our seasoned vets, Sally and Martha; to Emily and Licia who run organizations serving thousands of youth; to Camille, who recently launched a program to build confidence, leadership, and teamwork through rock climbing for young women in Utah’s refugee community, I realized that this alliance isn’t just a privilege, it’s a necessity. If we are to advance justice, equity and inclusion we simply cannot operate in silos.

As I write these words, it is 5:45 am and I am sitting on my couch in my living room, listening to the rain drizzle outside. It is finally snowing in the high country, and down here in Durango, sleep evades me. And so I wake up and summon the energy of the ten other women I met last week to share these thoughts with the world beyond my living room. Who knows what connection this blog might spark?

My dog, Grits, has awoken and joined me on the couch, ready for breakfast and to get on with the day. Before I close up shop, one last scene from the trip comes to mind. It was our last morning on the trail, and as the sun coyly peeked its head over the ridgeline, a few of us huddled together among our tents, reflecting on the previous night’s conversation, sharing our takeaways from the trip, regretting it was over so soon, and already plotting the next one. Afterall, we have a legacy to continue and someone has to tend that fire. 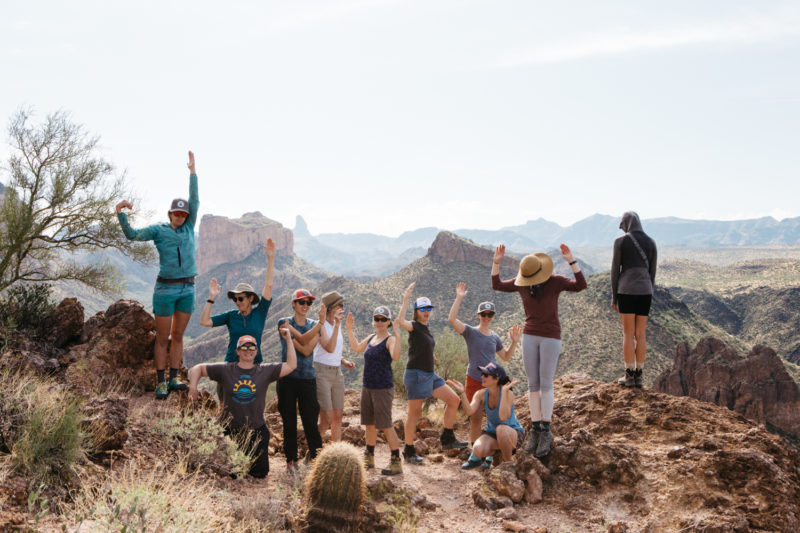